My team is building some new awesomeness for Visual Studio and having fun conversations along the way. Here is the latest thing we are tossing about and we would like your help in thinking it through.

A given class may be referenced many ways in code. Not all of those ways are things we think of as a reference, though. When you consider the below examples, ask yourself, is this a reference?

What do I mean by ?Is this a reference?? Pretend I have tooltip or some tool that shows me ?references? to my class. Does the example in each case increment the reference counter? Consider this in terms of what is in your mental model of the code, not what is in the IL. I want to know how you think about it, not the compiler.

In this case, the reference count of class Foo is obviously 1.

When a class inherits from another, does that increment the counter?

Does it matter when the derivation is internal to the class being referenced?

Does this increase the reference counter for class Foo() to one or two? Remember I am wondering about what?s in your mental model, not what the IL does physically.

Has class Foo been referenced one or two times below?

How about now? Is the count the same or different as the above example?

How ReSharper Does It

This is the configuration dialogue for ResSharper?s ?Find Usages ? Advanced? feature. Note I am showing the default settings. 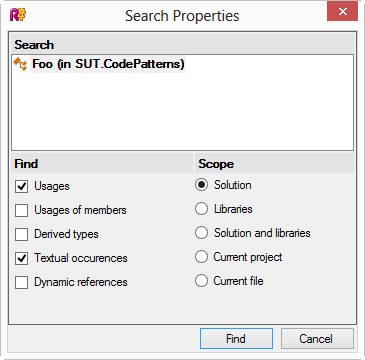