The Worst Software I’ve Ever Written

The Worst Software I’ve Ever Written

I have been stupid busy and am stacking up blogging topics like cordwood. Maybe it’s because of that guilt that I am about to tell you about the absolute worst piece of software I ever gave birth to.

My guilt over this is so core to my being that just relating the story is going to feel like recovering from the flu, I think. Please remember that this happened early in my career as a software developer. OK, excuses done. Here goes.

The company had a product that was a giant pile of content. The content had been marked up into HTML by hand via a note-paddish application that made every file essentially different in chrome and in layout. This was a massive pile of hand generated HTML: think encyclopedia Britannica big.

The big pile of HTML (POH) was great when it was being sent on a CD to clients (yes, it was that long ago), but a new business opportunity arose for us to host the POH on a web server on the Internet.

The only rub in this idea was the fact that the POH needed to be skinned for individual clients. The idea is a simple one that we now think of as a core function of a multi-tenant web site. Show the same content with different branding and chrome.

In my previous job, I had written code that parsed news feeds and sports scores and wrote HTML pages out to ESPN.com. This was reasonable solution at the time because we were going for performance over any other advantage.

So, using a similar technique I wrote wrote an application that used an internal parsing engine to process a proprietary language embedded in my own template language.

So, to make that simpler: 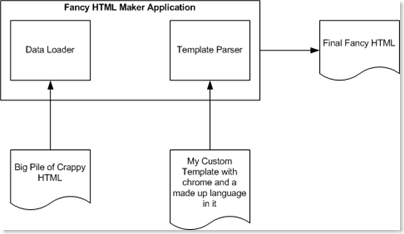 This was implemented in Java and had some pretty trick code in it that allowed me to do basic looping structures and things in the templates with a custom language. This allowed me to make lots and lots of copies of the crappy HTML with different logos.

Here’s where it goes from bad to horrible.

My boss walks in and announces that there is this new technology called ASP (classic in VBScript, not ASP.NET). So, the order is this:

“Make the Fancy HTML Maker Application write out the files with a file extension of .asp so that we can be using Active Server Pages.”

“Huh? But this ASP thing might be cool because it lets us do dynamic data binding to web UIs and …”

So, I added the “feature” to my perfectly executed bad idea of a content engine and embedded things like this into the asp pages that got written out:

The ASP “application” loaded up about a thousand params out of the database during it’s 30 second OnSessionStartup function and re-used them out of the client session.

Nothing that reasonable. Nope, I wrote out each ASP page as a file so that the links looked like this:

That’s right. I wrote and ASP file for every HTML page equivalent.

I don’t even know what the hell to call a solution like that. It isn’t really an application. It’s not really static content. I’m not sure what it is, but it is mine. Yes sir, all mine.

This application remains my reminder we sometimes need to be more professional than is asked of us.

There you have it, my worst software shame. What’s yours?

11 thoughts on “The Worst Software I’ve Ever Written”