I recently inherited the role of Product Owner for my company’s implementation of Team Foundation Server and Team System. One of the first things I recognized is the confusion around what the pieces of the system are and who should be using it (along with who shouldn’t). To help with that discussion, here is a high level model of the different packages that make up the whole of Team System. Click the image to blow it up. 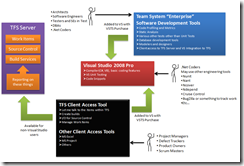 As we can see, there are many different actors in this system. The image doesn’t really break out the Team System versions of the different engineering tool packages. These are based on primary role and include:

In addition to all of these different ways to access the system, Microsoft has just released TFS and Visual Studio 2008. This means that many of the pieces of the system have received new features or changes in functionality. This is all good stuff, but it does introduce a level of complexity. Should we migrate? Should we do so incrementally? All at once? What did we learn in our 2005 implementation that informs how we should structure our 2008 implementation differently?

You get the idea.

One thing a good product owner needs is a reasonable way to actually see the views each of the users sees. In pursuit of this goal, I am going to build a lot of machines. Fortunately, these will all be managed as virtual machines using Microsoft’s System Center Virtual Machine Manager. This new I.T. tool from Microsoft is HOT. I love that I can have a library of VMs and only spool up the ones I need. This allows me to create my library of machines I need to be a good product owner, because there are a lot of them.

That’s right, 12 machines. I am going to try running all of them on Windows Server 2008. I just found my new best friend, and it is Virtual Machine Manager. Using this technique for mocking the entire system, I should be able to maintain a reliable environment for R&D. This will be particularly handy as we look to implement customizations to process templates, but more on that another time.

There goes my MSDN license for OS installations.