Here are the links to the previous installments:

Writing unit tests for your code drastically reduces the amount of debugging. This is the case for practically any programming language that you work in. But when the shit hits the fan, having a debugger with some decent features at your disposal is a must. However Node.js doesn?t come with a debugger out of the box. Thankfully there are a couple of debuggers out there like ndb, node-debug and node-inspector, which I?ll going to be demonstrating in this blog post. For this blog I?m going to show you some of the nice capabilities of node-inspector.

Installing node-inspector is actually pretty easy when you have npm installed. Just issue the following command:

Now we can startup node-inspector ?

which shows the following output if all goes well:

Now that we have node-inspector running, we can start debugging our node.js application in another console:

which outputs the port on which the debugger is listening.

Now you can open Chrome and point it to the following URL:

If all goes well, then we?ll get to see some JavaScript source code: 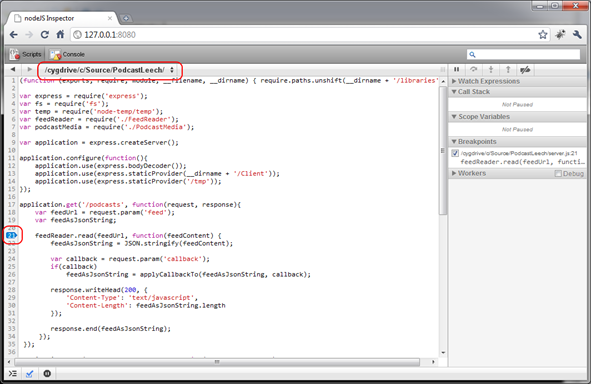 Note that you?ll have to use Chrome or another WebKit based browser for opening node-inspector. I also tried it in Firefox, but the page doesn?t show at all.

You can then select the JavaScript source file that contains the code you wish to debug and add breakpoints like you would normally do in an IDE like Visual Studio.

Now we can start using our application until we hit a breakpoint. 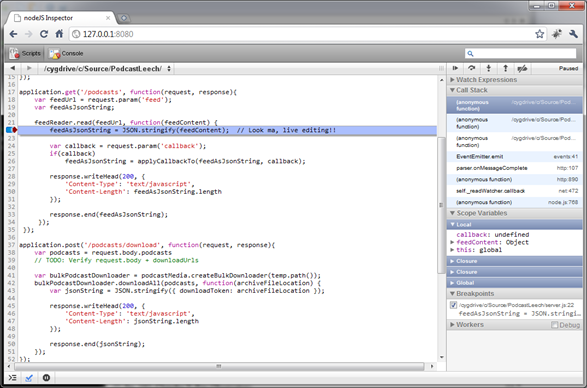 On the right of the page we can add watch expressions, look at the call stack and the current values of the scope variables. In the code window we have the usual suspects like ?Step over?, ?Step into next function? and ?Step out of current function?. We can even do live editing and all of this right in the browser! Tooltips also work as expected. 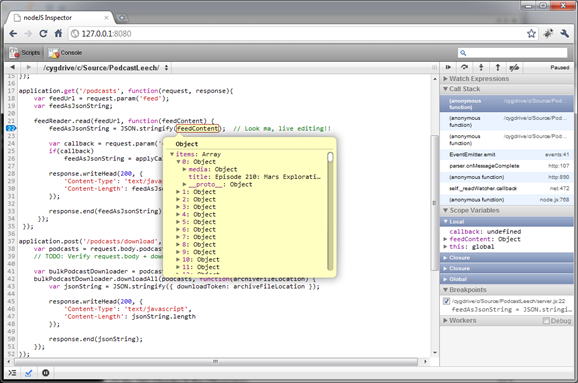 Another nice feature is the console window that can be shown/hidden below or taking over the entire window by clicking the menu button at the top of the page. 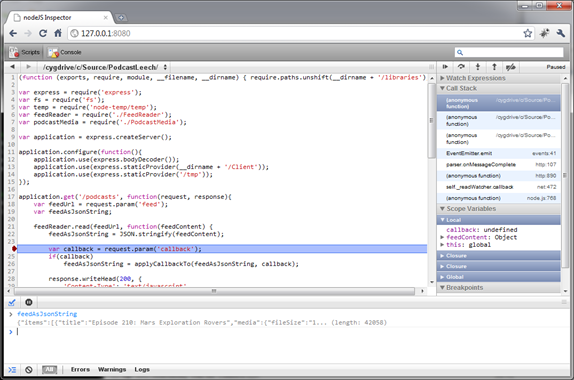 Because I?ve been using version 0.2.3 for developing my very first application using Node.js, I had to install an older version of node-inspector. If you decide to use the latest version of Node.js, you will see that a couple of interesting new features have been added, like heap snapshots. Make sure to watch this short screen cast to get up and running in no time with node-inspector.

Using node-inspector while developing Node.js applications can really save you a lot of grief. It certainly helped me to find a couple of bugs that would otherwise be hard to track down. It?s also a great learning tool if you would like to learn more about how Node.js behaves at runtime.

3 thoughts on “Taking Baby Steps with Node.js – Debugging with node-inspector”