The last day of the conference was all about taking action as a community. Which actions should be taken based on the open-space sessions of the day before? I attended the ESB Patterns session which mostly handled actions for the MassTransit open-source project. Again, the notes of the other “action” sessions are available on the wiki.

I gained a lot of new insights from being at this conference and I realized that I need to learn some more. I know that its kind of early for New Year’s resolutions, but I want to put out a number of actions for myself.

I know that this is very ambitious, but hey, it’s my list. I hope that I can look back at this post next year while having learned and accomplished most of the items on this list.

I want to round of this post by saying kudos to Scott Bellware, Dave Laribee and all other attendees for a wonderful learning experience.

Also a special thanks to Michael , Conrad and the other guys for driving and letting me and Peter tag along. 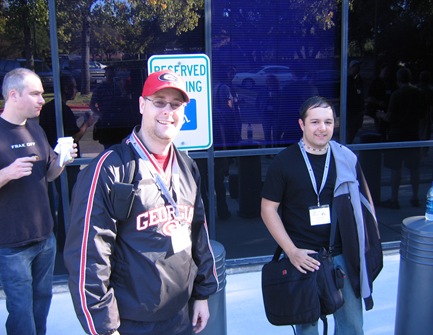 I also finally got to meet fellow Elegant Coder Jarod Ferguson and others who I previously only knew by name or blog picture. I really enjoyed it.