Life With My Geek – Sexy Bag

Life With My Geek – Sexy Bag

A while back I wrote a post about the geek?s new lap top carrier.  And the tour of the new bag that was offered to me when said bag arrived.  After a few fan letters begging for more information on the bag (wow, seriously, you geeky types just never stop surprising me), I?d like to take you through the bag tour.

Here are the new bags: 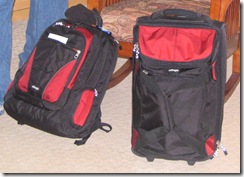 The geek thinks they?re sexy.  He uses that word.  Sexy.

I?d just like to interject here that it would never in a bazillion years occur to me to call a lap to carrier, or a suitcase for that matter, sexy.

So the bag on the right is my geek?s new suitcase.  It hails from eBags, and is called The Motherload Mini.  It fits into an overhead bin,holds a week?s worth of clothes (thanks to NASA and their Space Bags) and has all sorts of cool features.  One of Dave?s favorite features is this little pocket that holds his gels and liquids.  He meticulously puts his gels and liquids together in a little container, and then puts this into the special pocket: 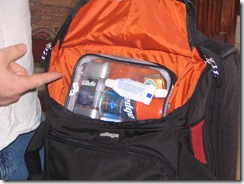 And then he almost always forgets to take it out when he goes through security.  Which means he then has to have the entire bag riffled through.  On the last trip he was verbally patted on the head by the baggage screener when she said, ? Good job sir, you almost had it this time.?

Did you note that the bags match?  The geek thinks this makes him look ?like a seasoned executive traveler? and ?metro?.  In his estimation, these are good things.

Moving onto the laptop carrier.  Also by eBags, The Macroloader.  (As an aside, I think eBags needs to fire whomever they?ve got naming their products and hire me and a few of my friends.  A round or two of martinis, and we?d come up with something WAY better than The Macroloader.) This bag was purchased after HOURS of research and with great expectations.

This bag needed to hold 2 laptops and fit comfortably when loaded with all the cables, drives and wires the geek carries around with him just in case his client asks him to build a plasma atom smasher while he?s teaching them Scrum techniques.

And, to my relief, the bag lived up to expectation: 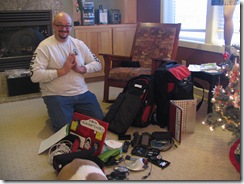 Look how happy he is.  Look at all the stuff he fits into that sexy bag.

And look at his atrocious leg lamp?

2 thoughts on “Life With My Geek – Sexy Bag”