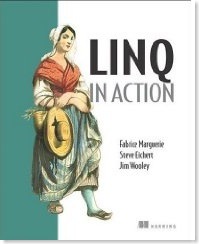 Yesterday I stopped reading LINQ in Action after I read just the first two parts about LINQ to Objects and the last part about building your own LINQ provider. Although we’re only talking about 200 pages here, it did take me while to get through. Not because we’re dealing with rocket science here, but because I got bored fairly quickly I guess. Maybe its because LINQ is a topic that doesn’t interest me that much. Sure, I make use of LINQ expressions in my code and it does provide me with some clean syntax from time to time. But for some reason I can’t explain, I’m not that interested in LINQ so that I want to know everything there is to know it.

Why did I buy the book in the first place then? Well, I bought this book a long time ago because, like most books I buy, I read a lot of good things about it and I needed to get up to speed with this LINQ thing at the time. I kept putting it off until I read C# in Dept last year, which does a much better job at explaining the new language features of C# 3.0 including LINQ. At least, that’s my opinion.

As I already mentioned, the first two parts deals with LINQ to Objects. The third part talks about LINQ to SQL, which we all know by now, is as dead as a doornail. Part four handles LINQ to XML, which is probably useful but because I try to avoid XML as much as I can, is not something I consider interesting. Lastly part five is the best part of the book and somewhat recommended to learn about the inner workings of LINQ.

Yo may be surprised to read that I don’t like this book while so many people found it useful and learned from it. Well, gladly we’re not all alike. In the end, I think its a matter of style and interest. I wouldn’t recommend LINQ in Action as I would recommend C# in Dept.