Looking back at the past 11 months (that’s more or less how old Nancy is right now, time sure flies!), the hardest part of it all haven’t been to code any of the features in Nancy. The hardest part, without any doubts, has been to translate the essence of the framework into a logo.

I will be the first to admit that the main reason it’s taken so long is because I have been extremely picky about the logo we would end up choosing.

The technical aspects of the logo have never been an issue to me, the problem’s been translating my passion for Nancy into a design. I am a big fan of graphics design so I’ve done my fair share of reading on the subject, enough to know that the logo would need to follow a couple of guidelines to make it well balanced.

I’ve known from the start that I wanted it to scale well (both up and down), consist of both a text and a symbol, that the symbol should be strong enough to stand on it’s own while still contributing to brand recognition, just to mention a few of the technical aspects of the logo.

Early on we knew that the essence of the logo should capture the two words simple and elegant. We also knew that I wanted it to have a slight feminine touch to it because of the name.

We’ve had the opportunity to work with a couple of designers and also had community contributed suggestions. However, no of them have really managed to make me fall in love with their work.

Out of the blue, Nicolas Garfinkiel submitted a draft of a logo concept he had been working on the day before. We immediately fell in love with it. The logo was pretty much spot on right from the start and it only took us about a week of me and Steven nitpicking over minor details (several e-mails where exchanged on the look of the nose in the logo!) to get it done.

Not only had we fallen in love with Nicolas concept, but we were also amazed with way he conducted his work and the professionalism the brought to the process. Huge kudos to him for that!

So after nearly 11 months of struggling to get a worthy logo for Nancy, all it took was a random submission on our user group and a week worth of polish to get it done. Frankly it was worth the wait.

We are so pleased with the end result that it doesn’t matter that so much time have passed. I would have hated if we had picked a logo early on, even though we weren’t in love with it. 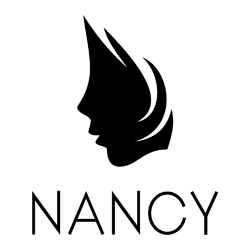 This the vertical composition of the logo, that I absolutely love. The balance between the size of the silhouette and the size of the text is awesome. The use of the negative space to create the bangs really pops out. 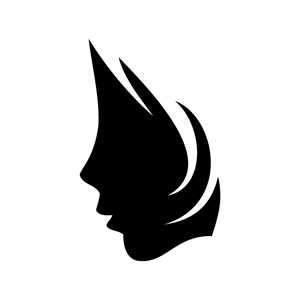 Here the silhouette is on it’s own. Again the use of the negative space, to create the bangs, really pops out. The silhouette is such a strong graphical element that it will be easy to create brand recognition with the help of it.

The work on the logo isn’t quite done yet. The actual logo is set, but we have set up a new repository, that we call Nancy.Portfolio, where we are working on committing all the material for the logo. This will include a graphical profile guideline for the use of the logo, as well as various file formats and resolutions of the various compositions of the logo. So keep an eye out for when we start pushing it out!

4 thoughts on “Nancy: Expressing a vision in pixels”