This is Not a Bug

This is Not a Bug 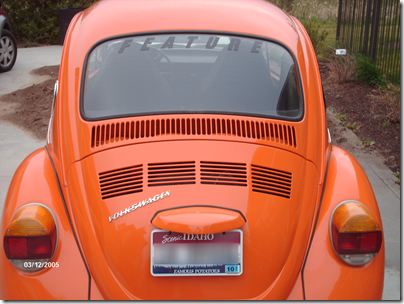 My wife and I decided to get an economy car to go along with the gas prices. I figured this was a great idea until I saw the price of a new sub-compact. What a better idea, though, than to get a car I can pay for with the change jar on my dresser?

This thing is in totally mint condition and needed nothing but a radio and that sweet sticker on the back window. I ordered the sticker with the intention of putting it on the back deck so it would stand out against the awesome orange paint, but my neo-conservative wife convinced me to only put it on the back window and now you can barely see it. That is so lame.