A new version of the Extended WPF Toolkit was released today and it is packed with goodies.  And to all you cry babies who wined for a VS 2008 and .NET 3.5 version finally got on my nerves enough to create one for you.  Ha, just kidding, but there really is a Visual Studio 2008 and .NET 3.5 binaries and source available for download.  One caveat to the 3.5 version is that it has a dependency on the WPFToolkit and won?t work without it.

What?s in it do you ask? Five kick @ss controls:

BusyIndicator makes it easy to let the user know when an application is busy. Simply wrap the relavent content in an instance of the BusyIndicator control and toggle its IsBusy property to True during any long-running process.

The ColorPicker is an editor that allows a user to select a custom color including support for transparency.

The ChildWindow ? although it is in alpha

Similar to the functionality of a traditional, standard Windows Forms dialog window, the ChildWindow allows you to popup both modal and non-modal dialog windows using C# or XAML. 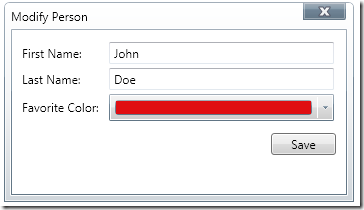 These controls need to be pulled through the mud, used and abused.  Help me find the bugs and make this toolkit a solid toolset that any WPF developer would want in their toolbox.  please submit all issues to the Discussions section of the Extended WPF Toolkit project site.