My apologies to all those who have been waiting for the deployment scenario ? I appreciate your patience.  My approach to deployments has been a moving target ? as it is starting to firm up a bit, I thought  I would write down some thoughts.

For more information on this series, please see the introductory post. In the previous post, I discussed build scripts as a way of extending the functionality of TeamCity.  If you downloaded the sample solution, you could see the tasks and structure of the NAnt and Rake scripts.  Since then, I have fully embraced Rake as my default build script engine; therefore, my script examples in this post are Rake scripts.

Don?t forget to listen to Elegant Code Cast #28 , where Chris Brandsma and I had the privilege of speaking with Jim Wierich, the father of Rake.

I have modeled the Rake scripts after the Fluent NHibernate and FubuMVC scripts.  I am also very interested in rake-dotnet from Pete Mounce.  Once rake-dotnet has support for NUnit and MSpec, I will be migrating my scripts to use it as a base library.  (Pete, I am actually planning on a patch for both ? you know?in my spare time.)  Rake-dotnet is definitely worth checking out, especially if you use xUnit as your test library.

Here is a representation of my preferred folder structure for a solution: 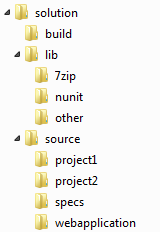 The following tasks are completed on each check-in:

A post-build event is run on each web application project to pre-compile the site into a specific directory for each compilation type. My post build event looks like this:

The post-build event is also a good place to add any plug-in type binaries not directly depended on by your site, but included in your solution. Each site also has a set of configuration sources for each environment up the chain (nightly, test, staging, production)

After the build, I have added several folders and archive files to the build directory: 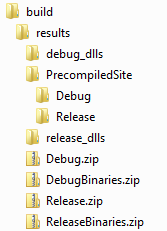 The archive files are stored in subsequent builds.  I never have to rebuild my solution for each platform.  Here is an example artifact path definition:

For the nightly build artifacts, I have the following definitions:

When the nightly build is run:

When a subsequent environment is run:

The idea is to feed up the chain of deployments the artifacts needed to complete the next deployment.  It takes a little trial and error to get it right, but the benefits are worth it.  Our current builds at Unity Media Group take 2 to 3 minutes for the compile check (including test runs and zipping files), then approximately 45 seconds to deploy the site on the internal network.

What I have not automated yet (but would like to):

To update the configuration files, I define the following method in my helper file:

And this is how I use it in the rakefile:

Similarly, to smoke test the site, I have the following class in my helper file:

And this is how I use it:

There is much more to the rake scripts; however, you should peruse the rake files from Fluent NHibernate or FubuMVC for more ideas on writing your own Rake scripts.  You can incorporate rake-dotnet into your rake environment, as well.  Finally, you can accomplish the same tasks using MSBuild or NAnt, if you feel more confident in those environments.