{? Removed big long story about how I ended up writing this post which provides no value to the blog?}

Summary of big long story to at least give a little context as to why (yet another post on optional parameters):

Once I learned that you could place default values on interfaces it left me with questions? So, what better way to figure them out? Go test it?

Disclaimer: (Shouldn?t every blog have some context enlightening disclaimer?)
I haven?t looked up best practices or lessons learned from people that have had this language feature (VB), so I?m just doing this as an experiment for myself. Hope some of my findings help the other C#?ers wanting to learn a little about the feature.

What are optional parameters?

Can an interface define a default value?

Can I specify a default in the concrete implementation, if the interface has a default also? 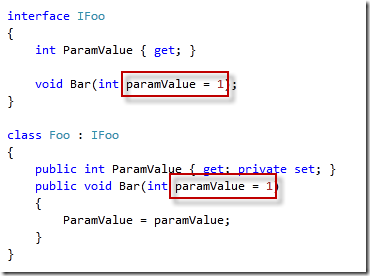 What happens when the concrete implementation has a different default value than the interface?s default?

If the interface has a default value specified, that is different from the concrete implementation, then it depends on what reference you?re using when executing the method. 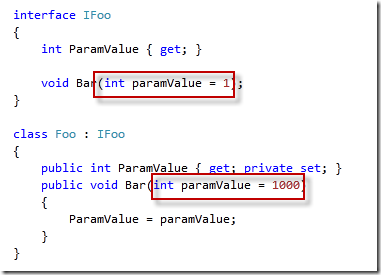 In the case below we are executing the method directly off of the Foo instance and will therefore get the concrete implementation?s default value when executing.

And in the case below we cast the Foo instance to an IFoo and it will then use the interfaces default value when executing.

Below are some examples of the different use cases.

The next experiment – Extract Interface.

Next I tried removing the IFoo interface that I?d created manually, because I wanted to exercise the ?Extract Interface?? functionality, just to see how it dealt with the these defaults.

Luckily, there were no surprises. The interface it created was exactly (less spacing) the same as I originally had.

Although it didn?t display the default constant value in the dialog during creation, there was a hint that the method signature had a default by placing [] around the int resulting in ?Bar([int])?. 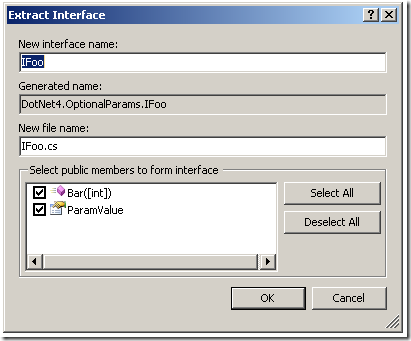 Side Tool Issue: Can?t say I like how it forced me to put the interface in a different file, I guess it?s enforcing ?best practice? here, but I prefer to do this later in the dev cycle than immediately (kind of like how R# allows you to place in the file next to the original class). #ToolGettingInWay

Optional Parameter Issue: One issues I see with this solution was the dirty/icky copy/paste feeling I got when extracting the interface ? the default was copied from the class to the interface.

(in no particular order of preference)

On the surface named parameters seem like a very simple feature to the C# language. But after delving into the feature a little, I can see there are many complicated scenarios you can get your self caught up into.

As with anything?Use with care!