I was recently asked to write a fairly simple piece of code.? In this simple piece of code, I didn?t handle a null input.? I was asked about what kinds of things I would consider about the input, and I pretty much knew what the asker was going after.

What do you do if “null? is passed in?

My answer may turn out to be a bit of a surprise.

Nothing, I don?t handle nulls in code that I control the use of.

?What?? What?? you say.? ?You don?t handle null?? What kind of heresy is that??? It is the kind of heresy that helps produce elegant code and I will show you why.

How well do you handle null right now?

Would you say that in most of the code you write you properly check all arguments for null?

Or, do you like most developers, handle null in certain cases when you happen to think about it, or after the application dumps a ?null pointer exception? stack trace?

Be honest, look at your code if you have to. 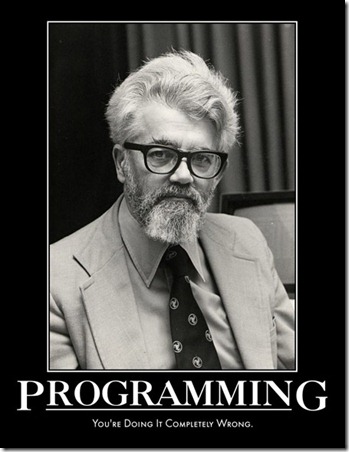 So, if you are not handling it correctly right now, then what can you do to fix that?

Avoiding null in the code you ?own?

The better strategy is to never pass null in the first place.

You can either focus your efforts on:

The more elegant solution is to focus on never passing null.? By doing this you will end up writing less code and avoid decisions about how to handle null inside of a method that doesn?t have enough context to decide what to do.

Let?s look at an example:

You can see there that we are checking each parameter for null.? The problem is we don?t know what we should do.? We have lots of options, but none of them are obvious.

How much better is it to make sure that we never pass null into methods, rather than write this kind of code in every method?

What about accidentally passing in null?

Many of you are probably thinking at this point that the main way null gets passed into a method is because someone calls a method without knowing that it contains a null value.

Perhaps mysteryObject.Text is null.? You wouldn?t even know it.

The practices that prevent null from accidentally being passed in make your code much more elegant than repeating if blah == null code all over the place.

In general, you should always strive to eliminate the passing of null rather than checking for null.? By doing so you reduce extra lines of code in each method, and are forced to use better design practices.

Yes, there are times when you need to check for null.? If you are writing a library that external developers will use, then you will probably want to check for null in all of your methods that are exposed as part of the API.? (On your internal methods, you don?t need to since you have already cleansed the input.)

Also, if your code is being used as a callback to some API and you don?t know if it can ever pass null into your code, you probably should check for null.

A bad excuse is that other developers may pass null to your method. It is much better as a software shop to put the onus of not passing null on the caller of any method rather than putting it on the writer of the method being called.

You will also reduce your exception handling code, because you will have less exceptions for invalid parameters.